On Friday I went to an inspiring talk in London by Paull Young, Digital Director of Charity: Water, who was over from New York. Earlier in the week, at the UK’s Institute of Fundraising Convention, references to the US based Charity: Water occurred repeatedly at seminars. You can understand why – their growth is the talk of many fundraisers. And it’s not just their growth that is admirable – it’s the way they have approached it.  Their intention from the outset has been to try and “reinvent charity” so that people not only give but inspire their friends to donate too. 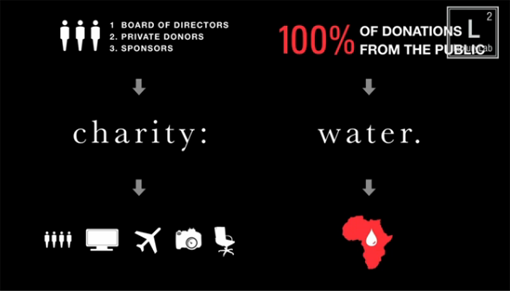 “Inspiration is the most important part of a digital strategy“, Paull began, and went on to explain how “fundraising online needs to be about where you tell your story”. The analogy being if you speak to people about your cause you don’t ask them for $20 straight up. Communicating on the web should be no different to how you communicate when people come to visit you – you show pictures, you tell stories, and if you do your job, you inspire people to take action. In fact it isn’t about ‘digital’ at all. It’s about people to people. In Paull’s words, “Every fundraising campaign is a word of mouth of campaign”. And you can see instantly why that works because word of mouth is so powerful.

Paull’s simple observation is the web has become about relationships and connecting people – yet much of what he sees when it comes to charity websites is “paper on the web” (in stark contrast to the people he meets who work for charities and how they talk passionately about thier cause).

And what does that mean? “We don’t ask people to give – we ask people to raise“, is how Paull summed up Charity: Water‘s way of engaging people.

That’s a totally different approach. To do this you need to give people an amazing customer experience which includes making them feel their contribution really does make a difference – which Charity: Water do by allocating 100% of donations from individuals to projects and geotagging every water pump they install so donors can see where their support goes.

The focus is getting people to share not to give. “No one is going to share a sad dog video unless they are a sociopath“. And Paull even admitted that, sure, by using a hard hitting approach, you will always get a better response. “People might not get their wallets out straight away. But I don’t want their wallets straight away – I want them for the next 10 years“.

So what is the implication? It is pretty profound.

You need to make a choice. Is your charity’s marketing about getting people to give (classic response driven marketing), or inspiring people “to raise” and get others to give?

You can’t have two brands – one that aims to get money out of people and another that aims to inspire people. Those messages are totally different. Could you test them then? No. No you can’t. The former, getting people to give, will always win in a ‘test’. It will get the better response (note response). All those measures fundraisers are obsessed with (and bound to) such as ROI, response rates, cost of acquisition, are all measures for the style of response/broadcast based marketing.  Comparing the two is like comparing apples and pears. This isn’t a change in tactics. This is a change in strategy.

Organisations with established direct marketing operations will struggle to embrace an inspired based approach as the pressure from within will be to remain in the safety net of what they know in uncertain times, despite declining response. And yet in an instant they could switch the donor acquisition budget  ( the one that costs £100-£200+ for each new donor and has 2-3 years payback) into embracing this sort of approach – not getting people to give but inspiring people to raise and getting others to give.

That acquisition budget could be allocated to re-positioning the brand, realigning staff about the new approach, and creating a great customer experience. It will attract new supporters at a fraction of the cost. It will fundraise more net income.  But the vast majority of established charities will find it so hard to change. It’s too unknown. So that leaves the way for newer organisations willing to embrace a totally different approach.

I don’t even see it as a choice. How do we make choices now when we want to buy something of any value? We ask our friends and close networks (or check out how other customers rate a product before buying it). So just think how powerful it could be when our friends and close contacts ask us to do something they passionately believe in. Or when a cause is truly supporter led, as Charity:Water clearly is.