Instinctively anyone who has taken the trouble to meet supporters of their cause and inspire them, knows that the money will come. Ken Burnett put it so well at the recent Institute of Fundraising National Convention “Fundraising is not about asking for money. It’s about inspiring people to change the world for better”. Hear hear!

There are big implications if we are to take this to heart.

I can illustrate this using a series of supporter “roadshows” we did at ActionAid. Staff from a number of countries where ActionAid works were over in the UK for some training, so we used this opportunity to go out and meet supporters. 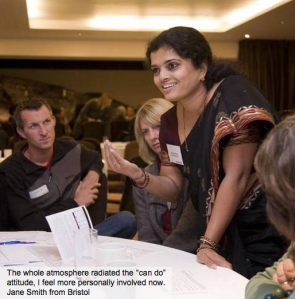 Rashmi from ActionAid India engages with supporters from Bristol

Events were held around the UK  – Exeter, Bristol, Birmingham, Leeds and London. The event was free to attend.  At some locations we started worrying if we would have to turn people away. The London event coincided with a tube strike, and still people came.

So what was the return on investment? It took a lot of effort to get venues, prepare presentations and transport everyone around. It was exhausting for those of us who took part. On the night/afternoon ActionAid didn’t raise significant sums of money – a few coins in the tin, some enquiries about sponsoring another child.

But I knew instinctively  that it would payback in dividends (instinct by the way isn’t just some woolly feeling, it’s your sub-concious telling you, from all your experience, to take note). I believe all those supporters who came are far more likely to keep supporting ActionAid (and if prompted or asked, would recommend ActionAid to their friends, or even a stranger). Even those with doubts or questions, left reassured by being able to speak to someone directly. “Its so good to meet someone from ActionAid in person” would be said again and again.

And there were some magical moments. In Birmingham a young girl read out a message to the child she sponsors in Haiti in front of a room full of supporters. And the ActionAid staff, who spoke about their experiences working in places like Guatemala, Haiti and Pakistan, started to realise how to connect to the supporters. They realised that how they told their story, with anecdotes and feelings, was more powerful than the facts read from a powerpoint slide. That was an extraordinary insight, which means that their communications from the field will be so much stronger in the future. Finally, at one event I accused someone of not putting the legacy packs out. They had. One by one the stack had been taken! So if we just look at return on investment (in hard financial numbers) then these sort of events just wouldn’t happen.

Which is why, if fundraising is about engagement, we will need new measures and indicators. If we stick to return on investment we will continue to use tactics that bombard and ‘shout’ at people to give now. If we think about return on engagement then we will look at the number of supporters we meet, whether supporters recommend us, and we will listen carefully to find out from supporters what they want to hear. Most importantly we will do the right things that will engage people (and the money will come).

Still not convinced? Below is the wordel generated from the feedback forms people handed in after one of the supporter events.

Inspiring people to change the world for better

So what’s my learning?

You can’t beat face to face meetings with supporters. Take every opportunity you can. There will always be a reason not to (something back in the office you just have to do) – but I guarantee you will gain a key insight, you will be inspired, and you will inspire them. In fact I now understand why this is so important. The future of marketing (see July 9th post) is about how to engage people, not broadcast to them about your product. That means you need to understand where they are coming from. You need to be able to answer the question, What’s on their mind? And the best way to do that is simply sit down and have a conversation with them. So why wait to be invited? Be proactive and go to see them – few organisations seem to take the trouble. Inspire people to change the world for better.

After all isn’t that what fundraising is about?

Check out the following – replace ‘customer’ with supporter or donor.

How to Make Your Customer a Hero  http://linkd.in/poSPFV
Why the Customer Is No Longer ‘King’. They Are Your Partner http://t.co/Q5v1u3F

4 thoughts on “Inspire and the Money Will Come”